This relic was once the pride of S. Burde Burnett, an important cattleman and member of the Quanah Route’s board of directors. The car was named for Burnett’s famous “Four Sixes Ranch” located in Wichita County.

It was built by Pullman in 1894 and purchased shortly thereafter by Burnett, who promptly branded it the “6666”. The story is told that Burnett won the big pot with a hand of four sixes, and that he adopted that brand to celebrate his victory. Although this is a more romantic tale, the truth is that Burnett bought a herd of some 100 cattle from a Frank Crowley of Denton County in 1871, and Burnett elected to keep the 6666 brand which Crowley had already impressed on the stock. 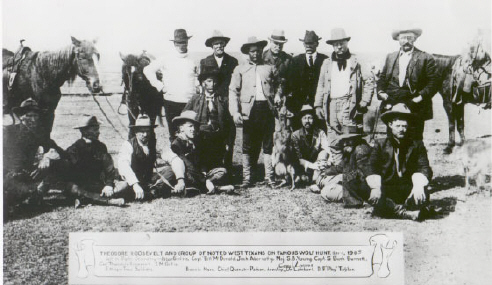 In time, Burnett’s holdings grew until he became one of the cattle kings of the Southwest, and he bought the Pullman car to make more comfortable his travels between Fort Worth and his ranch. The 68-foot car boasted a steel underframe, a composite body with wood plating, and rode on six-wheel trucks.

In April 1904 President Theodore Roosevelt traveled by special train from Fort Worth to Frederick , Oklahoma for a wolf hunt, and rode aboard the “6666”.

The QA&P was chartered in 1908 with Burnett elected as Vice President. In 1917, he leased the “Four Sixes” to the railroad for an annual fee of $630. The car was put in storage briefly during World War 1, but soon thereafter Burnett died and the car was purchased from his estate for $11,120.66. It was later steel plated and fitted with new electric lights and steam heat. In 1922 the Frisco purchased the car and renumbered it as the 1922… the year it was acquired. In the 1940s the car was redesignated as #8, since the line’s business cars bore numbers from 1 through 15.

In 1944 or 1945 it was renumbered as #10, and although the Frisco began naming their business cars for the stated it served, this was not to be for the “6666.” And it never received a state name. It was also in the ‘40s that the railroad removed the clerestory and gave the car a “turtle” roof. In the 1960s the car was repainted in the new Frisco color scheme of orange and white. Sometime after that (the date is uncertain) the Frisco sold the “Four Sixes” to a private party in Nashville, Tennessee. It was resold to another party in Arlington, Texas and then given to a moving company. It is now owned by Fischer & Wieser Specialty Foods, Inc. and serves as a unique Guesthouse. Many Texas Hill Country visitors have enjoyed the accommodations that once housed Theodore Roosevelt.

Back To Pullman Car

We are committed to ADA compliance. Read our accessibility statement.